Kagen the Damned by Jonathan Maberry 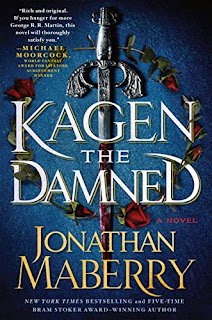 2) The Witch-King is very scary.

3) “…Gods of the…” will be said and breathed many a time in this book.

My husband has some Jonathan Maberry books, a zombie series, if I’m not mistaken. Zombies are decidedly not my thing so I never read them and as a result this is the first of  Mr. Maberry’s books that I’ve read. The description for this story was so interesting that I felt compelled to accept the invitation to read an advance copy of this and I'm glad that I did.  The author’s writing style here is very visual and that’s really enjoyable. This adult fantasy is heavy on the violence,yet is very easy to read, even for me, who has to hide her eyes when throats are cut or people are stabbed on-screen.

I’m not much for comparisons so instead of making any I will simply say that this book was pretty wildly entertaining and if you like world building fantasy, then I suggest giving it a try. The world building really was awesome and the character development is terrific. There was a cliffhanger at the end and I want to read more of this series (hopefully soon).

Thanks to St. Martin’s Press and NetGalley for an eARC of this title. Opinions shared are influenced by nothing other than my reading experience.

Kagen the Damned marks the first installment of an exciting new series of dark epic fantasy novels from bestselling author Jonathan Maberry.Sworn by OathKagen Vale is the trusted and feared captain of the palace guard, charged with protection of the royal children of the Silver Empire. But one night, Kagen is drugged and the entire imperial family is killed, leaving the empire in ruins.Abandoned by the GodsHaunted and broken, Kagen is abandoned by his gods and damned forever. He becomes a wanderer, trying to take down as many of his enemies as possible while plotting to assassinate the usurper, the deadly Witch-king of Hakkia. While all around him magic—long banished from the world—returns in strange and terrifying ways.Fueled by RageTo exact his vengeance, Kagen must venture into strange lands, battle bizarre and terrifying creatures, and gather allies for a suicide mission into the heart of the Witch-king’s empire.Kings and gods will fear him.Kagen the Damned 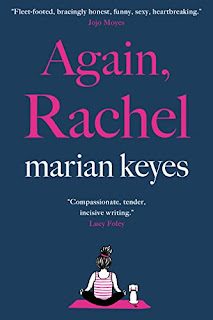